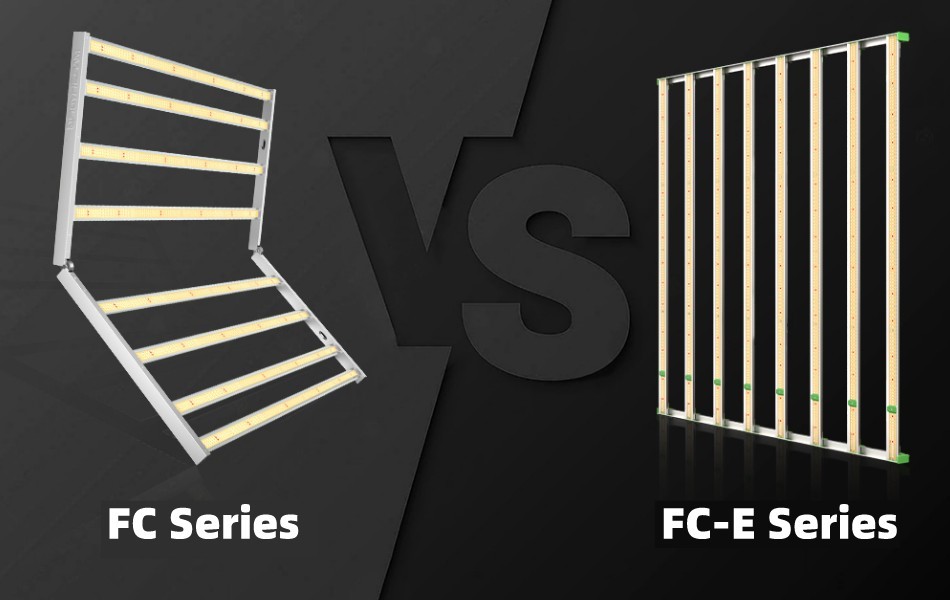 After the release of the new FC-E series, many customers feel confused about how to choose between the FC series and FC-E series. They have similar names and similar appearances, but their prices are quite different.

In this blog, we’re going to explain their similarities and differences.

To clearly understand their differences, we must first know their similarities. FC series and FC-E series have 7 similarities.

·Appearance. They are both multi-bar style LEDs, covering a square area.

·Spectrum. They have the same spectrum design.

·Heat dissipation performance. They have the same heat sink design – A peak-shaped aluminum heat sink on each light bar to increase the heat dissipation area. So if you ask which is cooler. We would say they have little difference in this aspect. But FC-E series will generate more heat because they have more chips.

·Uniformity. Due to their multi-bar style appearance, both series have an even light distribution. And, because the chips and bars are specially arranged, they have a more uniform light distribution than other LEDs.

·Waterproof. They are both in IP65 waterproof rating.

After we find all their similarities, now it’s time for their differences. They have 5 main differences.

The biggest difference between the FC series and the FC-E series is the LED diode mounted.

These two brands are known in the industry. Samsung is well-known as a leading diode manufacturer; BridgeLux is a local American manufacturer with 18 years of experience. There’s nothing much to say about the history. They’re both reliable manufacturers. If you are interested, you can check their official website for information. What we growers are concerned about is their contribution to indoor growing.

In terms of efficacy, Samsung is the winner. Therefore, to ensure the whole-light efficiency of the FC-E series, we use more diodes on it. You can clearly see this in the below table.

As we mentioned in our previous blogs, more diodes on the same wattage grow light is beneficial to grow light because of low-current driving. But Samsung’s efficiency is undoubted.

However, there’s still a small gap in whole-light efficiency between the FC-E series and the FC series. See the comparison of PPE/PPFD below.

It is most accurate to measure the efficiency of a grow light by PPE or PPFD. Let’s review their definitions:

PPFD– Photosynthetic Photon Flux Density (PPFD) is the measurement of PAR delivered to a specific area. It is expressed as micro-mole-per-meter squared-per second (µmol/s/m2).

PPE– Photosynthetic Photon Efficacy describes how much light a grow light produces from its input power. The metric used to measure PPE is micro-moles per second per Watt -which simplifies to µmol/J.

The PPE & PPF data of the FC series and FC-E series are shown in the table below:

FC series has higher efficacy than FC-E series, but their gap is small – which means they will have similar grow results with one light.

FC series(4800 & 6500) is foldable. The light body itself can be folded in half. This design avoids the inconvenience of transporting and storing the huge light body, and the ability to fold freely at 180° allows the light itself to be bent to an angle to focus light on the central area – reduce coverage area for more light in the center.

FC-E series are built with detachable light bars. This makes transportation and storage more convenient and the moveable light bars also provide growers with a more flexible, unique space to make their own lighting system. For example, unique design central and side lighting using FC-E4800 and SP3000.

Apparently, these two series have a huge gap in price – that’s the main reason why customers want to know their differences.

The major reason for this price gap is that Samsung diodes are a lot more expensive than any other diode in the market. As a result, when you find a grow light mounted with Samsung diodes is very cheap, it must be a fake or use an inferior diode model which is much less efficient than the 3030 series. (Lm301 series)

Our comparison above is clear. For practical applications, PPE (or PPFD) & body design & prices are the major differences that may have an impact when using.

0.1 µmol/J PPE gap between FC series and FC-E series won’t make much difference in personal cultivation. But when it is applied to large commercial cultivation, 0.1 difference is able to create thousands of dollars margin. Of course, if you’re an individual grower seeking top yields, the FC series will be your best choice.

The detachable-bar design might be a small surprise for individual growers to enjoy the DIY time, while it is tough work for commercial growers because you will need to install hundreds of bars after receiving the lights.

Let’s make a conclusion directly with a picture: 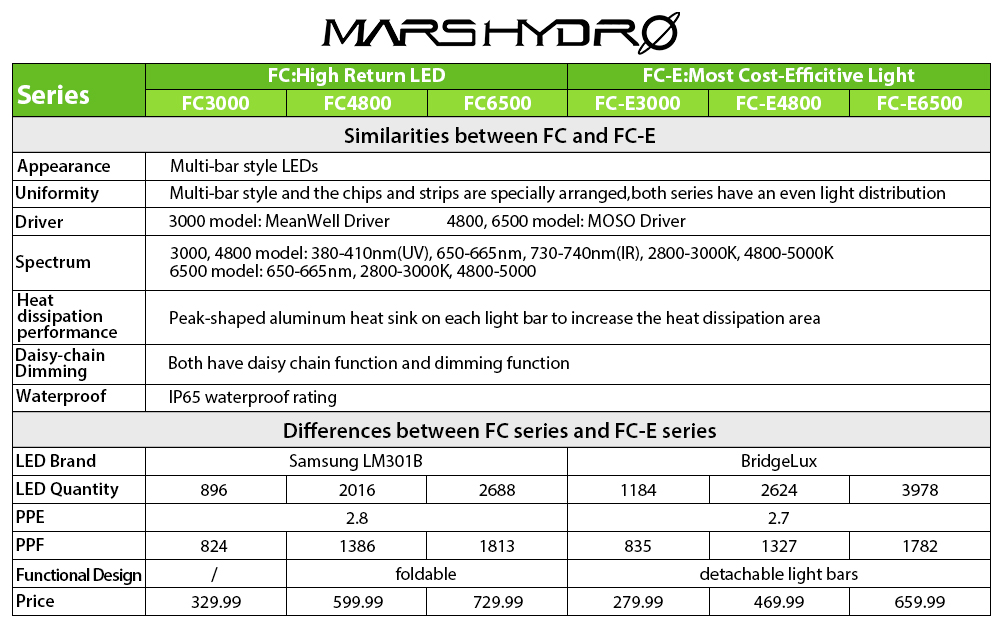 Or if you want to know more clearly. just CONTACT US directly. We’d love to answer any questions.

Newer What Are The Hanging Heights For LED Grow Lights?
Back to list